Greetings Reader! It’s been a while since I last wrote something in English. This morning while checking my inbox I found a question: “What is Hadith Qudsi?” the term Hadith Qudsi means Sacred Hadith. Before explaining the difference, you need to know what is Hadith? Hadith is “collection of traditions containing sayings of the prophet Muhammad which, with accounts of his daily practice (the Sunna), constitute the major source of guidance for Muslims apart from the Quran.”

What is the difference between Hadith Qudsi and the normal Hadith, to save my time I will quote from Quran Explorer: “Hadith Qudsi are the sayings of the Prophet Muhammad (Peace and Blessings of Allah be upon him) as revealed to him by the Almighty Allah. Hadith Qudsi (or Sacred Hadith) are so named because, unlike the majority of Hadith which are Prophetic Hadith, their authority (Sanad) is traced back not to the Prophet but to the Almighty. Sacred Hadith is, as to the meaning, from Allah the Almighty; as to the wording, it is from the messenger of Allah (PBUH). It is that which Allah the Almighty has communicated to His Prophet through revelation or in dream, and he, peace be upon him, has communicated it in his own words. Thus Qur'an is superior to it because, besides being revealed, it is His wording."

Said that, I remembered my favorite Hadith Qudsi, to be honest my favorite including the normal Hadith  so I decided to share it with you as well.  On the authority of Abu Dharr al-Ghifari (May Allah be pleased with him) from the Prophet (Peace and blessings of Allah be upon him) is that among the sayings he relates from his Lord (may He be glorified) is that He said:

“O My servants, I have forbidden oppression for Myself and have made it forbidden amongst you, so do not oppress one another…..

O My servants, all of you are astray except for those I have guided, so seek guidance of Me and I shall guide you….

O My servants, all of you are hungry except for those I have fed, so seek food of Me and I shall feed you….

O My servants, all of you are naked except for those I have clothed, so seek clothing of Me and I shall clothe you….

O My servants, you sin by night and by day, and I forgive all sins, so seek forgiveness of Me and I shall forgive you….

O My servants, were the first of you and the last of you, the human of you and the jinn of you to rise up in one place and make a request of Me, and were I to give everyone what he requested, that would not decrease what I have, any more than a needle decreases the sea if put into it…. 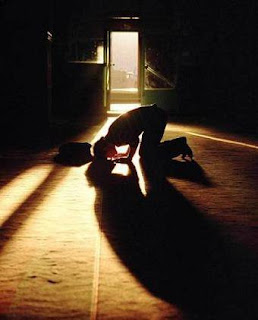 Posted by AbdulAziz Mohammed at 7:26 AM