Book - The Criminals of Islam

I just finished reading "The Criminals of Islam" by the Pakistani author Shabbir Ahmed. “Shabbir Ahmed was born in Pakistan in 1947. He is a medical doctor who served many years in the military in the Pakistan Army and the Royal Saudi Army (Medical Corps). As a member of the royal medical staff of Kingdom of Saudi Arabia in the 1970s, he learned the Arabic language (Quraish dialect, the language of the Qur'an) under the auspices of Malik Faisal bin Abdul Aziz and Malik Khalid bin Abdul Aziz of Saudi Arabia. Since moving to the USA in 1979, he has practiced medicine in Florida, and is an Islamic scholar and historian. A prolific writer, he has authored numerous books and articles on Islam and history, in both English and Urdu languages. He is best known for his QXP - The Qur'an as it Explains Itself - a translation of the Qur'an completed in full public view.” - Official Author Page. Note that the book is available for download and can easily be found through google.

When I read the introduction: "A book of this kind has never been written before. It took courage to write this book and it will take courage to read it" I thought I would read something that have unshakable basis and irrefutable arguments along with shocking discoveries. However, I think I overestimated the author. The criminals of Islam to him are the Hadith Scholars, scholars like Al Bukhari, Muslim. Among the Criminals are the four most popular scholars of Islam, Abu Haneefa, Anas Ibn Malek, Mohammed Ibn Idrees Al Shafei and Ahmed Ibn Hanbal other Sufi figures such as Al Rumi and Al Jeelani . Now why they are criminals, because the Hadith Scholars narrated made-up lies to the Prophet Mohammed or they used to hate each others while Sufi because sometimes they would claim they are God or messenger of God or other reasons.

Most of his claims are not based on authentic reports while many others are taken out of context and some others is his wrong and lack understanding of the Arabic language with all due respect to the author. However, I still admit in some cases his words and claims are true but not very much. Plus he did fall victim to hatred similarly like how Ahmed Subhi Mansoor did fall before, he is blaming Bukhari for the Hadiths in his book before even questioning himself: "What if Bukhari wasn't liar but those who told those Hadiths to Bukhari were?" he didn't even give a chance for this to happen, even though he himself claimed some of them to be criminals such as Ahmed Ibn Hanbal it just show the man does have a hatred toward el Bukhari.


The content of his book when it comes to real validation and test would immediately collapse if you ever studied such topics, yet I still smiled while reading because of his comments, they are funny sometimes. I see him following the footsteps of others almost copy-pasting Arabian authors who wrote similar books before him. Anyway overall my rating for the book doesn't exceed 4 out of 10. I read so many books criticising Hadith Scholars but only few of them had strong basis for their claims and strong arguments to support their theory but this one not really. Well regardless, I am sure those who resent Islam would find this book very much appealing to their tastes. May God protect our heart and cleanse it from any hatred or evil towards the world. 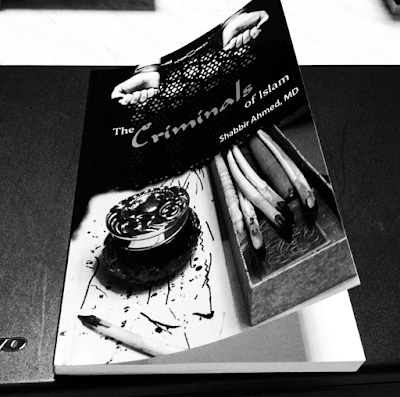 Posted by AbdulAziz Mohammed at 3:31 PM